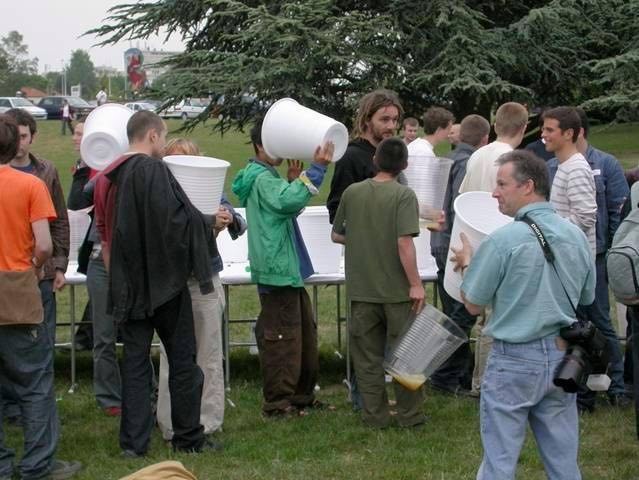 It was mainly intended for the college crowd.  I’m not a doctor, but I figured someone might stumble on to my site looking for an answer to this question.  Therefore, here is the text of the brochure:

—
While most college students understand the importance of drinking responsibly, situations can arise where people become very drunk.  Providing care for a person who is drunk is important; failure to act could result in a life or death situation.  By following the steps outlined here, you will be better prepared to handle an alcohol-related emergency:

END_OF_DOCUMENT_TOKEN_TO_BE_REPLACED

One night a police officer was staking out a particularly rowdy bar for possible DWI violations. At closing time, he saw a fellow stumble out of the bar, trip on the curb and try his keys on five different cars before he found his. The man sat in the front seat fumbling around with his keys for several minutes.

Meanwhile, all the other patrons left the bar and drove off. Finally he started his engine and began to pull away. The police officer was waiting for him. As soon as he pulled onto the street, the officer stopped him, read him his rights and administered the breathalyzer test to determine his blood-alcohol content.

The results showed a reading of 0.0.

END_OF_DOCUMENT_TOKEN_TO_BE_REPLACED

I wrote here in the past about the recent induction of new Texas members into the membership of  the NCDD. NCDD is the National College of DUI / DWI Defense. NCDD is the premier organization among DWI and DUI defenders across the nation.  I figured I might as well keep up this trend and report on new membership.

Other recently inducted members in Texas who have joined myself and others into NCDD include:

Well, I’m happy to say this was a great week for me and my clients in Collin County.

So I’m thinking, wow, how am I going to get all this done?  Well, Tuesday rolls around, and both license suspension hearings get dismissed — my clients ill not have their respective licenses suspended.

END_OF_DOCUMENT_TOKEN_TO_BE_REPLACED

A few people have emailed me asking if I have given up blogging.  It is nice to know that someone out there noticed.

Well, I got very busy, and got kind of behind on blogging on a regular basis. Once I was behind, I felt like I was getting deeper and deeper behind.  Quite honestly, it seemed a bit like a chore, and I was disliking the blogging process.  I think the problem was my approach.

It also seems what is the "proper" way to blog (starting new conversations, and conversing/debating with other bloggers) seems to take the most time "per post."  I think I prefer to just talk about my experiences.

END_OF_DOCUMENT_TOKEN_TO_BE_REPLACED

Just an example of what the government can do.  This was not written by me, but rather a fellow lawyer in the community.  Worth a read, although not DWI related.

STATEMENT OF JON MAY IN
SUPPORT OF BENEDICT P. KUEHNE

END_OF_DOCUMENT_TOKEN_TO_BE_REPLACED

Congratulations to Birmingham, AL DUI lawyer and fellow blogger Steven Eversole on  his recent induction into the membership of the NCDD.  NCDD is the National College of DUI / DWI Defense.  NCDD is the premier organization among DWI and DUI defenders across the nation.

Other recently inducted members in Texas include:

I thought one area to start the new blog focus was on explaining a little bit about the new Collin County Courthouse.

The courthouse where most DWI’s are going to be handled will still be at County Courthouse located at 1800 North Graves Street, in McKinney Texas.  This is where they have been for a while.  Eventually, we are told that they are going to be moving into the new District Courthouse.